Today we have a guide to ‘terminal multiplexing’ including suggestions on how to use it on computer clusters such as ShARC and Bessemer.

If the answer to any of these is “yes” then terminal multiplexing may help! 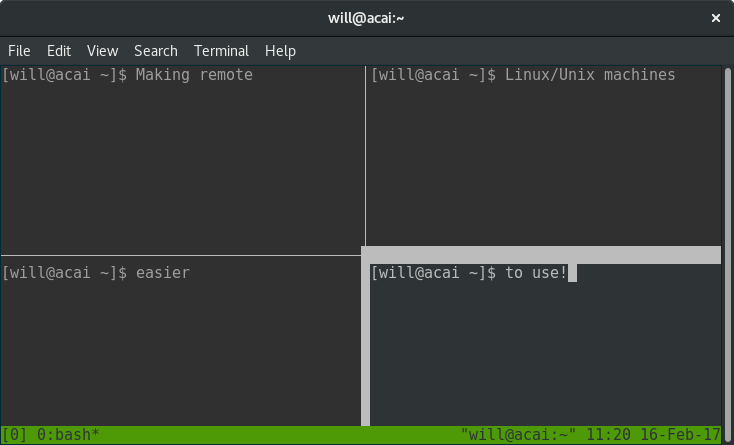 First, we need to delve a little deeper into some of the problems we are trying to solve.

Why do my remote processes die when my SSH connection dies/hangs?

(Skip over this section if you want!)

Every process (bar the systemd process or init process with a process ID of 1) has a parent process. If a process is sent a signal telling it to cleanly terminate (or ‘hang up’) then typically its child processes will be told to do the same.

When you SSH to a remote machine, the SSH service on that machine creates a shell for you within which you can run commands.

To illustrate, here I logged into a server and used the pstree program to view the tree of child-parent relationships between processes. Notice in the excerpt shown below that the SSH service (sshd) has spawned a (bash) shell process for my SSH session, which in turn has spawned my pstree process: :

So if the SSH service decides that your connection has timed out then it will send a signal to bash process were to die then any child processes started by that bash process would also die.

If the remote servers you work with are primarily High-Performance Computing (HPC) clusters running scheduling software such as Grid Engine then you have a simple, robust way of ensuring that the sucess of your processes doesn’t depend on the reliability of your connection to the clusters: submit your work to the scheduler as batch jobs. There are many other benefits to submitting batch jobs over using interactive sessions when using such clusters but we won’t go into those here.

However, what do you do when there is no HPC-style scheduling software availble?

Neither of these allow you to easily return to interactive sessions though. For that we need terminal multiplexers.

A brief guide to the tmux Terminal Multiplexer

Detaching and reattaching to sessions

Terminal Multiplexer programs like GNU Screen and tmux solve this problem by:

Here we look at demonstrating the above using tmux. I recommend tmux over GNU Screen as the documentation is clearer and it makes fewer references to legacy infrastructure. Plus, it is easier to google for it! However, it may use more memory (true for older versions).

Let’s create and attach to a new tmux session, start a long-running command in it then detach and reattach to the session:

In this case we started tmux on the local machine. tmux is much more useful though when you start it on a remote machine after connecting via ssh.

What else can we do with terminal multiplexers? Well, as the name implies, they can be used to view and control multiple virtual consoles from one session.

switch to next window

Dividing up Windows into Panes

Now let’s look at creating, switching and deleting panes within a window:

<prefix> Up or Down or Left or Right

switch to pane in that direction

You can scroll back up through the terminal history of the current pane/window using:

scroll back through terminal history

If you have multiple panes side-by-side then attempt to copy text using the mouse, you’ll copy lines of characters that span all panes, which is almost certainly not going to be what you want. Instead you can

toggle the maximisation of the current pane

then copy the text you want.

Alternively, if you want to copy and paste between tmux panes/windows you can

(in copy mode) mark start of section to copy

You can then move to another pane/window and press

I find this mechanism very useful.

Things not covered in detail here include:

Terminal Multiplexers can be useful if doing interactive work) on a HPC cluster such as the University of Sheffield clusters ShARC and Bessemer (assuming that you don’t need a GUI).

On ShARC and Bessemer can:

However, note that you can have nested tmux sessions (with <prefix><prefix> <key> used to send tmux commands to the ‘inner’ tmux session).

Warning: many clusters have multiple login nodes for redundancy, with only one being the default active login node at any given time. If the active login node requires maintenance then logged-in users may be booted off and long-running processes may be terminated (before the system administrator makes a ‘standby’ login node the currently active one). Under such circumstances your tmux/Screen session may be killed.

Being a good HPC citizen

Your interactive job (on a cluster worker node) will be terminated by the cluster’s Grid Engine job scheduler after a fixed amount of time (the default is 8 hours) but your tmux/Screen session was started on a login node so is outside the control of the cluster and will keep running indefinitely unless you kill it.

Each tmux/Screen session requires memory on the login node (which is used by all users) so to be a good HPC citizen you should:

Tip: with tmux you can ensure that you either reconnect to an existing session (with a given name) if it already exists or create a new session using: :

This should help avoid accidentally creating more than one tmux session.

NB the recordings of terminal sessions shown were created using ttyrec and ttygif then converted to .webm videos using ffmpeg.